An apron with my name

I want an apron with my name on it. I stopped working full time in January. I can’t quite bring myself to call it “retired.”…

Falling out of love with my grill

I never thought I would see this day and I’m even hesitant to write about it, but I’ve had a revelation regarding my gas grill…

Forget grain bowls, coconut-oil based dressings and…please…no more kale. Lately, I’ve been pining away for a good old Wedge. No one knows who invented that…

Make yourself a regular

King Daddy and I adopted a travel plan when we first went overseas. Go to one locale and make yourself a regular. When we went…

I seem to be surrounded by goulash these days. Now that Dammit Boy lives in Vienna he makes it or eats it in a restaurant…

My son, who many of you know as Dammit Boy, is a 26-year-old research associate at the Vienna Center for Disarmament and Non-Proliferation. He is… 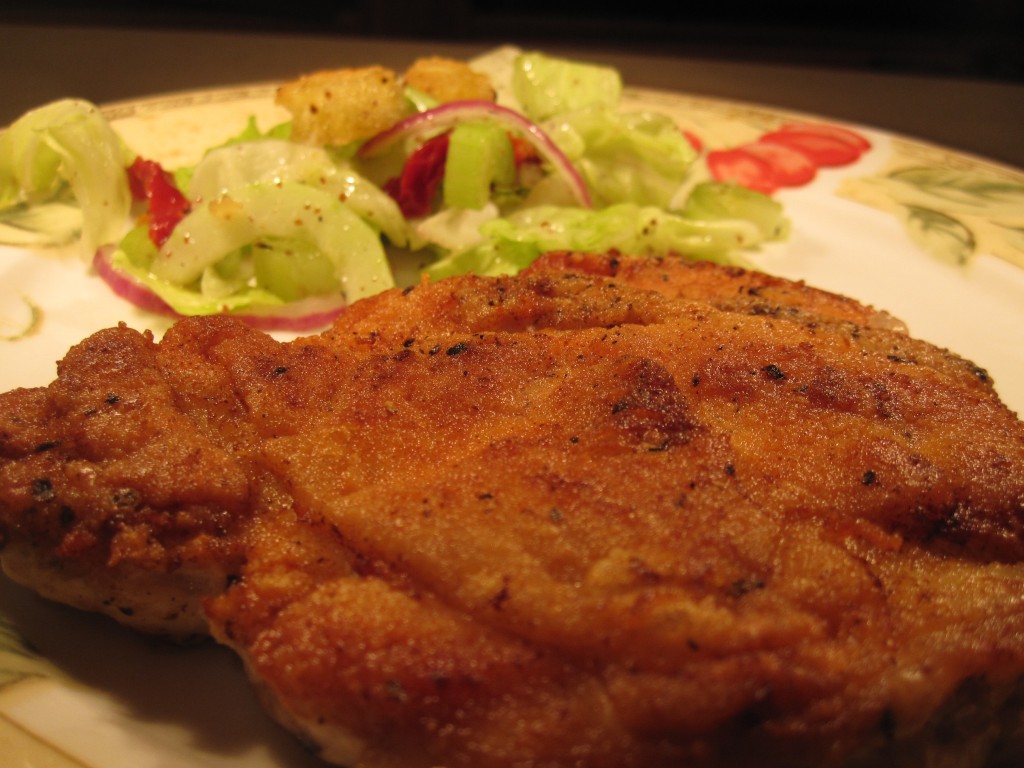 I know what you’re thinking. What in the hell is a paillard? In this case, it’s just another name for fried chicken, but easier.

So I was leafing through Bon Appetit a few weeks ago and came across Geoffrey Zakarian’s recipe for pan-roasted chicken paillard (Zakarian is the Iron Chef who never smiles). And it looked like one of those basic things that once you learn how to do it you will repeat it over and over. And, yes, you will. It’s like easy fried chicken without the mess of the oil to clean up and without having to guess when the pieces are cooked through. And when you click over to the Bon Appetit site to see the recipe, I think you’ll agree my photo of the chicken is better than theirs. Not that I’m bragging, which one does not do during Lent.

What you get is a juicy piece of chicken with a super, super crisp skin. Of course you want that, don’t you? The only trick to this recipe, which requires skin-on chicken breasts, is pulling the bones away from the meat. It’s simpler than it looks. The recipe also calls for clarified butter and that might throw you off. In layman’s terms, clarified butter is melted butter with the white stuff that floats to the top scooped off. You all have college degrees. I think you can handle that.

Melt butter in a small saucepan. Spoon off milk solids (the white foam that separates from the butter) to make clarified butter. (It has a high smoke point and won’t burn over high heat.)

Pour clarified butter into a large ovenproof skillet set over medium-high heat. When butter begins to shimmer, place chicken in skillet skin side down. Cook, occasionally pressing on chicken with a spatula so skin maintains even contact with skillet, until skin is brown, 5-6 minutes.

Transfer skillet to oven; roast until chicken is just cooked through, 3-4 minutes. Remove skillet from oven; turn chicken breast over. Let stand in skillet for 1 minute. Transfer chicken to a plate and let rest for 5 minutes.

Serve with lemon halves alongside.