An apron with my name

I want an apron with my name on it. I stopped working full time in January. I can’t quite bring myself to call it “retired.”…

Falling out of love with my grill

I never thought I would see this day and I’m even hesitant to write about it, but I’ve had a revelation regarding my gas grill…

Forget grain bowls, coconut-oil based dressings and…please…no more kale. Lately, I’ve been pining away for a good old Wedge. No one knows who invented that…

Make yourself a regular

King Daddy and I adopted a travel plan when we first went overseas. Go to one locale and make yourself a regular. When we went…

I seem to be surrounded by goulash these days. Now that Dammit Boy lives in Vienna he makes it or eats it in a restaurant…

My son, who many of you know as Dammit Boy, is a 26-year-old research associate at the Vienna Center for Disarmament and Non-Proliferation. He is…

King Daddy and I are going to Vienna. I am tempted to pronounce it Vy-eena as in the town in Georgia. But it is actually Wien as in Austria. I am learning. I have a guide book.

Here is a sentence I am bursting with pride to write. We are going to Vienna to see Noah, who is now working at the International Atomic Energy Agency, and who will in June depart for Moscow to become an Alfa Fellow for a year after receiving a double masters’ degree in nonproliferation and international relations.

I could go on and on about this and, upon reflection, I think I will. Ever since Dammit Boy departed Brentwood to attend graduate school at the Middlebury Institute of International Studies in Monterey he has excelled in the most elite program of its kind in the world. His Russian is fluent. He spent five months in Moscow studying at the Moscow State Institute of International Relations, where he will receive his second masters. He attended a high-level nonproliferation conference in Moscow last October. And he was called to Vienna to intern at the IAEA (or The Agency as it refers to itself) in January.

Noah at the International Atomic Energy Agency. I can’t understand a word he says now.

Now he has won a prestigious Alfa Fellowship to study and work in Moscow for a year. When he got to Monterey, his professor and mentor asked him how he planned to change the world. It was a serious question. He is now on his way to truly becoming an expert in U.S.-Russian nonproliferation policy. And he is closing in on the answer to that serious question. I’m getting a little verklempt. His father and I are over-the-mo0n proud of him.

And yet. I am horrified about my own personal situation here. Wait a minute, buddy. What do you mean you’re leaving me yet again to remain halfway around the world for a friggin’ year? This is not what I signed up for. I signed up for diapers and poop and throw up and endlessly bad school plays. (Don’t tell Noah but I actually brought wine to the Music Man at Brentwood Middle School and drank during the intermission. I think that might be against school policy.)

So King Daddy reminded me that we have not taken a fancy vacation in almost 30 years and that we might want to consider going to Vienna. That’s a lie. Not about the vacation. About whose decision is was. I practically leapt into the Atlantic and started swimming toward Europe the minute Noah told us he’d gotten the fellowship.

So here’s the good part. Vienna has great food. I think it might have a palace or two and maybe a church or something. But I am all about the Wiener Schnitzel and Tafelspitz. And the pastries. And the Naschmarkt, And shopping at Austrian grocery stores where I don’t speak a lick of German and the staff doesn’t speak a lick of English. I can make myself understood, I can promise you. 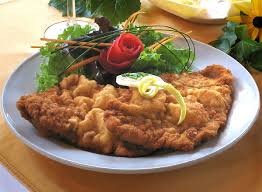 So this is Wiener Schnitzel. It’s about the size of my head. It’s veal or pork, breaded and then shallow fried in BUTTER. I am told that the place Noah is taking us for Wiener Schnitzel serves one that literally hangs off the plate. I am tremendously excited.

And this is Tafelspitz. It’s boiled beef that I have to admit sounded just terrible when I heard about it but Noah assures me it’s absolutely delicious, tender and juicy. It is THE dish in Vienna and I will happily tuck into one.

So wish us luck, King Daddy and I. This is our first international trip together and I am praying we do not kill each other now that our “alone” space will be eliminated. More than that I cannot wait to hug my sweet boy and cook with him and go to a food festival with him scheduled for a weekend we’re there. And take a tour of the IAEA and see the rarefied air in which he operates.

The last time Mark and I took a fancy vacation was on our honeymoon in Hawaii. And I can tell you one thing. I am pretty sure Vienna doesn’t have a submarine museum and for that I am eternally grateful.